Alexander Hamilton started the U.S. Treasury with nothing. That was the closest our country has ever been to being even. – Will Rogers

Typically, a Treasury auction isn’t that exciting. But a curious thing happened during the regularly scheduled 10-year note auction this month: buyers didn’t show up. The result was one of the worst bid-to-cover ratios in a decade. With greater deficits to fund and the U.S. a long, long way from Hamilton’s “even,” investors should wonder whether the outcome of the auction hints at something bigger, like higher 10-year yields in 2019.

It’s a warning A low bid-to-cover ratio is notable, especially in this environment. Treasuries are flooding the fixed income markets; currently, they represent nearly 23% of total debt outstanding, the highest level since that data started to be captured in 1970. The Treasury needs to put up more paper for auction to fund President Trump’s tax cuts and stimulus. Complicating matters is that the number of competitive bids for the longer maturing notes (5–10 year maturities) and bonds (10–30 year maturities) has been declining. For perspective, Hamilton created the Treasury department in 1789 to help the country manage its $77M debt. Today, that much debt is created every 28 minutes.

The Big Three aren’t helping The Fed, China and Japan, the three largest holders of Treasury debt with $2.3T, $1.1T and $1T, respectively, are either shrinking their holdings or not buying more. Brazil and Ireland are the next two largest foreign holders with approximately $300B each. However, they aren’t capable of picking up the slack left by the Big Three. Interestingly, the US household sector has increased its holdings of Treasuries at 40% CAGR over the past two years, and by 70% in the past year alone (see chart below). Households now hold just over 10% of total Treasury debt according to government data. 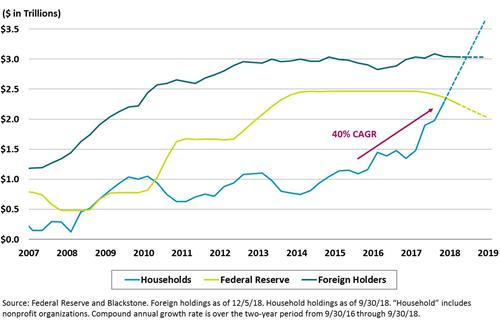 Supply/Demand imbalance isn’t all-knowing There are plenty who will argue that a supply/demand imbalance isn’t a great way to forecast the direction of Treasury yield, and rightfully so. It’s just one ingredient. Economic growth and inflation expectations are critically important as well. The consensus forecast of economists is for 2.6% growth in the US next year, up from 2.4% just a few months ago.(1)  From a rates perspective, GDP growth will generally bring upward pressure.

Wage inflation in the mix too Wage inflation is another important factor to consider. Labor market tightness isn’t likely to ease soon and higher wages will likely be the start of renewed inflation expectations in 2019. A sampling of Blackstone portfolio company data indicates that wages are running hotter than the official government statistics, which show average hourly earnings of nonsupervisory employees rising at 3.2% as of November. Additional supply, less predictable demand, GDP growth and inflationary pressures are all part of the mixture that argues for structurally higher 10-year Treasury yields in 2019.