Joe Zidle: Don’t Bet Against US

Many investors continue to obsess over the US economy's flaws and not its strengths, fearing a near-term recession. But strong labor markets suggest that won’t be the case.

Julian Edelman, wide receiver for the New England Patriots, challenged doubters in the postseason run-up to the Super Bowl: “Bet against us.” Despite being a top seed, critics harped on the Patriots’ inconsistent defense, dwindling receiving corps, and even their aging, world-class quarterback. It’s similar for the US economy today. Many investors continue to obsess over its flaws and not its strengths, fearing a near-term recession. But strong labor markets suggest that won’t be the case.

Labor’s winning streak Skeptics thought exogenous shocks could derail the labor market, maybe even the cycle more broadly. But the labor market has been a consistent silver lining amid the hurricanes, trade disputes and government shutdowns that wracked markets amid weaker economic data. Companies continue to hire workers at a breakneck pace to fill demand, even as unfilled U.S. job openings remain at the highest levels in the history of the government data. Notably, private firms are the economy’s first-string players, and they don’t hire people they don’t need. Blackstone’s portfolio company data for 4Q’18 confirm that the labor market is on good footing.

Wage upsets Wage inflation for hourly workers employed by a number of Blackstone’s private equity portfolio companies is roughly 0.5% higher on average than comparable government data.1 In addition, a significant number of our CEOs report that they raised wages by 4-5%+ in 2018.1 We believe that government figures are lagging our own real-time data, implying wages will head higher. However, we aren’t yet worried about excessive wage inflation. It’s true that the Fed has typically viewed 4% wage growth as an important signal, which they respond to with tightening. But wages have been rising relatively slowly. And even when that threshold is reached for the first time in an economic cycle, a recession is more than two years away, on average (see chart below.)

Consumers the odds-on favorite In our conversations with investors, most believe that the global growth slowdown will hit the US soon and that the economic cycle will roll over by next year. However, the US economy is relatively closed, a fact that can sometimes get lost. The domestic consumer drives about 68% of the US economy, compared to foreign trade at roughly 3%. We expect the US will continue to expand despite global headwinds.

Wages rising, not a concern yet 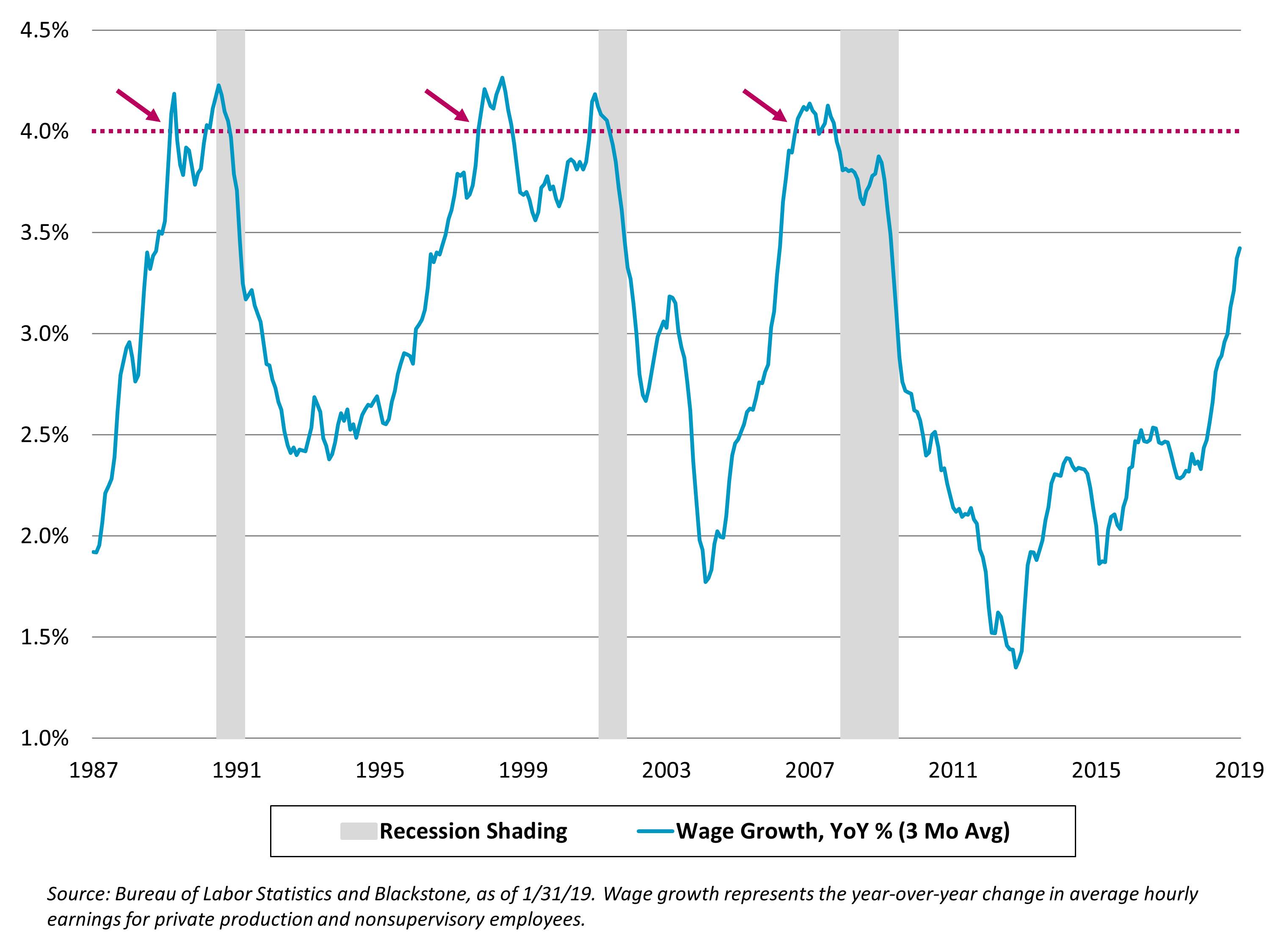 Halftime for risk assets In late 2018, as investors felt recession was imminent, equity valuations fell and credit spreads widened. So-called safe assets such as US treasuries and gold rallied. We’ve written that this was not the end of the bull market, but rather a mid-cycle pause. So far, this seems to be the case. Cyclical sectors such as energy, industrials, materials and technology have rallied in 2019, and credit spreads have narrowed. We expect credit spreads will narrow further and higher beta equities will outperform amid a broader recovery in risk assets. As Patriots quarterback Tom Brady said on the way to his sixth Super Bowl win, “We’re still here.” It’s not time to bet against the US either.

(1) Source: Blackstone and the Bureau of Labor Statistics. Blackstone data based on surveys of a subset of Blackstone’s corporate private equity portfolio companies, as of 12/31/18. BLS data represents year over year percent change of average hourly earnings of all private employees, as of 1/31/19.